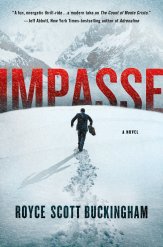 Stu Stark has lost his mojo. He had a prestigious job as a prosecuting attorney, a classy, ambitious wife, and an inside track to the top spot in the DA’s office. But that was before he was fired for losing the biggest case of his career, a mob-related homicide.

Now he’s turning forty, struggling at a tiny law firm, and has nearly given up. So when Stu’s more motivated law partner gifts him a one-week trip to the Alaskan wilderness to rediscover his manhood, Stu admits it just might do him some good.

Unfortunately, Stu is no outdoorsman. By week’s end, he’s sick, starving, and on the brink of death. Worse, he realizes that the float plane that dropped him off is not coming back. His only hope is a passing grizzled trapper who informs Stu that winter is coming, and he’s not leaving the Alaska interior anytime soon.

So begins Stu’s journey to become the man he never was…and to discover who’s been sabotaging his life in this gritty tale of self examination and revenge.