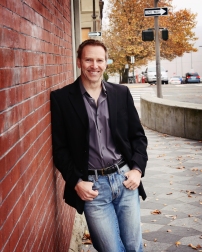 Royce Buckingham is an American fantasy writer with an English degree from Whitman College and a Law degree from the University of Oregon. In 2006, Royce sold his first novel, the middle grade fantasy DEMONKEEPER, to Penguin, Putnam. His screenplay for DEMONKEEPER then sold to 20th Century Fox.

In his debut, Royce made reading lists, garnered good reviews, and hit the bestseller list overseas in Germany. DEMONKEEPER (DAMLICHE DAMONEN) sold over 100,000 copies for Random House, Penhaligon, who then commissioned a trilogy.

In the meantime, Royce wrote two more middle grade novels for Putnam—GOBLINS, and his ghost story, THE DEAD BOYS, which was a Junior Library Guild selection. THE DEAD BOYS won the 2014 Washington State Sasquatch Book Award and has been a nominee for state reading lists in Florida, Louisiana, Oklahoma and New Hampshire.

Royce’s has two books with Saint Martin’s Press – a YA thriller, The Terminals and an adventure thriller, Impasse, for adult readers.

Royce’s next book is scheduled for release in 2021. The book’s working title is Monster Lawyer. Royce is represented by John Rudolph, an agent with Dystel, Goderich & Bourret .

In addition to writing books, Royce works as a prosecuting attorney and lives with his family in Bellingham, Washington.