I grew up playing Dungeons & Dragons. This is my original Players Handbook. It got a lot of love when I was a kid. 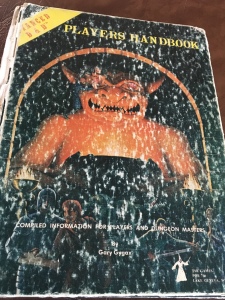 And these are my two best childhood friends, Mike Francis & Eric Yatabe. We get together every few years.

We played many hours of D&D growing up–sometimes a single game would last for weeks–so we decided to dig out our D&D supplies and play over the weekend as 50 year olds. 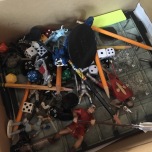 I volunteered to be Dungeon Master, selected a classic dungeon module from my original stash (Hall of the Fire Giant King), and studied it. My sons created character sheets. We took over the dining room table. And we played.

Being Dungeon Master is lot like being a storyteller. The Dungeon Master sets the scene and guides other players through the dungeon, always revealing just enough about what monster, trap, or treasure might be lurking or hidden around the next corner to keep them hungry and surprised. On this occasion the players broke into the castle with a spell that created a hole in the wall, and they trapped the Fire Giant Queen in her chambers. One player died in the fracas, and there was much debate about, well, everything. It was just as intense as when we were kids.

When I write, I tell stories the same way–set the scene, reveal enough to make the reader want to know more, and let the tale unfold naturally according to what the characters would do. I also think its infinitely more fun to show readers what’s going on than telling them–a mantra pilfered from my creative writing instructors in days of yore.

So…the game was still awesome. And relevant. I highly recommend a reboot for you elders who grew up with it. And, for my younger fans, it’s never too late to pick up the dice!